I thought this was interesting, yesterday – October 25th 2021, was Windows XP’s 20th birthday.  And here we are on the cusp of Windows 11 rolling out to workstations across the country.

What I really found interesting about this article was that it mentions a significant amount of people continue to use Windows XP to this day.  (Significant is pretty relative.)  Mainstream support for Windows XP ended on April 14, 2009, with extended support lasting another five years.  This means that anyone still running Windows XP has not received support from Microsoft for roughly 7.5 years now, including almost all security updates and fixes for vulnerabilities that may have been discovered.

Think of all the vulnerabilities, viruses, exploits that have occurred in the last 8 years.  Think of all the technology changes on the web.  These old systems are very vulnerable to abuse and modern secure systems cannot support these legacy devices.

It’s important to keep your systems patched for the latest security updates to protect your members data and your corporate infrastructure.  Members need to remain current to keep their own systems safe.  CU*Answers Web Services updates your WordPress website core and plugins weekly (and as needed for immediate vulnerabilities) and partnering with CU*Answers Network Services, we update the host servers monthly (or as needed for immediate concerns.)  In addition, we regularly sunset older technology that we can no longer support, usually because the manufacture stopped maintaining it, like Microsoft did with Windows XP.  The Internet Explorer web browser is another example.

Web Browser are constantly changing and last week we had a big change from Microsoft. The new version of Microsoft Edge uses the same rendering engine as Google’s Chrome. That means that websites viewed in the newest Microsoft Edge browser will look more like they are viewed in Google Chrome versus how they look in Microsoft’s Internet Explorer 11.

You may not notice that your website actually looks a little different in each browser, but our web developers do. We spend a fair amount of time creating websites that are as close to standard compliant as possible because it is our belief that all web browsers are working towards the standards. Long term, this reduces maintenance. It also helps with conforming to WCAG accessibility guidelines.

Our developer’s spend time checking your website in the major browsers, notably during new website builds, but also when making larger maintenance updates to your site. In general, we only support the last 2 major versions of the major browsers, Google Chrome, Mozilla Firefox, Apple Safari and Microsoft Edge/Internet Explorer 11 (that counts as 2). For what it’s worth, Microsoft doesn’t even want you to use Internet Explorer anymore if you don’t have to.

We’ve already been looking at your sites in the new Microsoft Edge browser, so as it rolls out to everyone’s workstations over the next few weeks your site is already set.

Read more about what to expect with Microsoft Edge 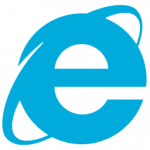 Internet Explorer had been the most widely used browser for a long time.  Then, other browsers like Firefox and Chrome came along and took away some of the popularity of IE.

Steadily, the number of IE users has been reduced to a mere 13.38% of the entire population of internet users.  For the first time, Internet Explorer usage has dipped below Firefox in popularity.  Firefox currently stands at a fairly steady 14.68%.

The reigning champion?  Google Chrome!  The Chrome browser currently holds the title as most popular browser as 55.3% of all internet users have chosen Chrome as their browser of choice.

It has been reported that IE may indeed fall off the face of the digital earth as soon as May 2016 unless something drastic changes.

While Firefox and Chrome embraced technology-forward ideas like auto-updates, evolving but consistent web standards and an open-source concept that allowed for users to develop addons, themes and other features to enhance the browsing experience, Internet Explorer stood staunch in it’s stance to only release new versions with each Windows release up until much recently.

For more information, check out this article on Gizmodo and the current browser-usage stats for February, 2016.

Lights Out for Internet Explorer 8,9 and 10

Microsoft urges users to upgrade to Internet Explorer version 11 or use their new browser, once known as Spartan and now known as Microsoft Edge for security purposes.

Of course, you also have the option to install a different browser such as widely popular Google Chrome or Firefox.

One more patch will be released on January 12 for the older browsers.  After that, “End of Life” notices will show.

For more information, read this article from ARS Technica.

Jan 6, 2016 at 11:16 am by David Damstra
Posted in News, Web Services | Tagged internet explorer, microsoft | Comments Off on Lights Out for Internet Explorer 8,9 and 10

Does your business use Microsoft Internet Explorer? If so, this is a must read

We came across some information we thought we should share. Your IT departments are probably already aware, but there is a change that is coming from Microsoft in January 2016.  Most notable is that only IE11 is secure.  All other versions of IE are vulnerable as they are no longer being supported by Microsoft.

Click here to read: Every version of Internet Explorer other than IE11 will be vulnerable next month

Dec 14, 2015 at 10:00 am by David Damstra
Posted in News, Web Services | Tagged internet explorer, microsoft | Comments Off on Does your business use Microsoft Internet Explorer? If so, this is a must read

When I started at CU*Answers nearly 10 years ago, our web site designs targeted an 800×600 browser size. This was considered the standard at the time. This meant that we considered the viewable space on any monitor with the web browser at full screen as 800 pixels wide by 600 pixels tall.

Over the years, the best practice moved to 1024×768 resolution and many sites were designed with this in mind. If you can picture these dimensions in your head, and relate them to TVs, you’ll notice they are the older square shape of TVs. It’s nearly impossible to find these now. TVs, and likewise computer monitors have moved to the wider letterbox, rectangular shape like cinema movie screens. END_OF_DOCUMENT_TOKEN_TO_BE_REPLACED