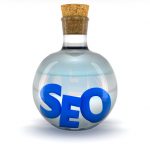 The Mysticism of SEO

Search engine optimization, or SEO, is a term that can mean many things. On one hand, it can indicate a dedication to valid code and smart content structures that make your web site easy for search engines to find, index, and link to. On the other hand, SEO has an increasingly negative connotation as a sort of shifty way of “tricking” Google into “ranking” your site higher than it ought to be.

You’ll often hear these two types of SEO discussed in terms of “white hat” and “black hat.” Some pretty notable instances of black hat SEO surfaced in 2010. Google, for its part, constantly updates its search function with improved algorithms and ways to mitigate these “black hat” SEO techniques. Google has actively punished sites that try to “game” the system by lowering their search ranking or, in the case of BMW in 2006, temporarily removing them from search results altogether. For our part, we stick to “white hat” SEO and follow Google’s own suggested best practices, which include things like using relevant words and phrases within the content of a site, smart and logical link structures, global navigation, and valid code.

“WordPress, straight out of the box, comes ready to embrace search engines. Its features and functions guide a search engine through the posts, pages, and categories to help the search engine crawl your site and gather the information it needs to include your site within its database.”

A lot of the behind-the-scenes code work that has traditionally made SEO with content management systems a bit tricky is already included in the core of WordPress. Beyond that, much of the rest of the “white hat” playbook is largely in your hands as the WordPress content administrator. Meta keywords, as has been noted here before, are essentially useless these days. The most important part of SEO, is, in fact, your content. And search engines, like Google, keep getting smarter. The SEO industry, according to some experts, is running out of ways to trick Google:

“The bottom line is that all external SEO efforts are counterfeit other than one:Writing, designing, recording, or videoing real and relevant content that benefits those who search.”

Adam Torkildson, one of the leading SEO consultants in the country, went on the record with Forbes and declared SEO as we know it will be dead by 2014. His conclusion?

“Invest in real, valuable, relevant content that your audience wants. Grow your internal thought leaders to where they can add value to your audience and positioning in the market.”

Ken Krogue summarized it perfectly: “Content is king, and communities of avid followers make the king.” This, in a nutshell, is our official position on SEO. The magic elixir of SEO is demystified. The very same words and vocabulary you’d like Google to index your site for should be put directly into your site’s content. Not via an image, banner, button, or badge. Directly in the text. As a credit union, your community of followers is pretty well defined already – your members. Engage with them to strengthen that community and, by extension, the credit union itself.